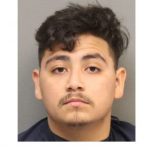 A 19-year old is arrested for motor vehicle homicide for the four vehicle collision that killed his 23 year old passenger on March 29th.

Police say that witnesses report that Marvin Rivas-Villanueva was revving up, accelerating, and traveling at a high rate of speed prior to losing control and crashing into oncoming traffic at O Street and Lyncrest Drive. Police say that evidence and reconstruction analysis show that Rivas-Villanueva was traveling at least 70 miles per hour on a wet roadway during heavy traffic prior to the collision.