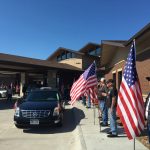 Dale Wayne Quick passed away at the age of 91 on Thursday, June 13th. Quick had lost contact with his family, who lived in his native Kansas, years ago. After his wife, Caroline, passed away in 1987 at the age of 42, Quick never remarried. He spent the last 17 years of his life at Lancaster Rehabilitation Center and had no known surviving family members.

Despite all of that, hundreds of people showed up at Roper & Sons South Lincoln Chapel on Monday morning in support of Quick, a veteran of the Korean War. Among those in attendance were Governor Pete Ricketts and United States Senator Ben Sasse.

“I mean, this is just a picture of what Nebraska is,” Sasse said. “I was telling my eight year old boy, here’s a guy who fought in the Korean War to fight for my kids and all other Nebraskans’ kids and grandkids’ freedom. Everybody in Nebraska has this feeling that this guy shouldn’t be laid to rest without a whole bunch of people here to salute him, his memory and his service.”

The service picked up some national attention as well when Jake Tapper, a journalist at CNN, found out that the funeral home was looking for people to attend Quick’s funeral. He tweeted out to his two million followers to notify them when and where the service was going to take place.

The funeral for Dale Quick, 91, a Korean War Veteran, is MONDAY MORNING 10 am.

He had no known survivors. Funeral home is appealing to veterans and community to attend

Although there was no official headcount, estimates of the amount of people that were in attendance number in the hundreds. “One of the guys organizing this thought it was north of 300 (people),” Sasse said.

Ricketts was impressed with the showing as well, who told KLIN that the people of Lincoln were eager to support the military veteran.

“I think it was one of the ways that we were all saying, ‘thank you for your service,’” Ricketts said. “This was a man who agreed to put on a uniform and put himself in danger to keep our freedom safe and the community wanted to pull together and say ‘hey we’re not going to leave you behind.’”

Quick served in the U.S. Army for seven years, from 1947-1955, until he was honorably discharged. Quick went on to work at the U.S. Postal Service, where he worked for two decades. He was born on November 20th, 1927 in Leonardville, Kansas to George and Genevieve Quick.

It’s a full house here at Roper & Sons South Lincoln for the funeral service of Dale Wayne Quick, a veteran of the Korean War. He died at age 91 with no known family but people have shown up in droves to pay their respects #LNK pic.twitter.com/xVb2coA4p8