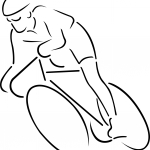 One of my favorite sporting events is underway for the next 3 weeks, the Tour de France. A new study in the Journal of Sports Science found a trick to performing better.  And it might work in other situations, not just sports . . .Researchers in the U.K. watched how 22 different cyclists pumped themselves up for a bunch of 10-kilometer races.

And they found that talking to yourself in the SECOND PERSON makes you perform better.  Like saying, “YOU can do this” instead of “I can do this.”

The ones who talked to themselves in the second person consistently did better, and finished the races faster.  The researchers aren’t sure why it works.  But they’ve got two theories. Saying “you” instead of “I” might help psychologically, by giving you a more distanced perspective.  Like you’re on the outside looking in.

Or, it mimics the way a coach or parent would speak to you.  And that alone puts you in a more disciplined mindset.