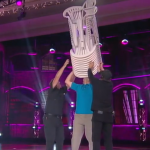 Brit, Jay Rawlings, used to hold the world record for the most chairs balancing on his chin. His record was beaten by an American, David Rush, a year ago. Not to be shown-up, Jay decided to take back his rightful title with not 9 chairs on Britain’s Got Talent…but wait…there’s more

As you would suspect, ego got the better of David and he wanted the record back AND make it so, it would be virtually impossible to beat. At the point of this recording on the Huckabee Show, he had to beat someone else who held 11 chairs on their chin…and…well…see for yourself.

Now, David hold a number of other World Records, some of which are variations on thenselves, such as:

While these seems strange, he has something most of don’t have….time on our hands.