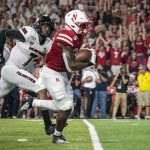 With the first home night game beckoning, Nebraska players, coaches, and fans still had the sting from a late game collapse to Colorado last weekend fresh in their minds. That all seemed to melt away, at least a little, over the course of a feel-good 44-8 victory over Northern Illinois at Memorial Stadium in Lincoln on Saturday night.

Sophomore quarterback Adrian Martinez led the offense to their most complete performance of the 2019 season, hitting on 16 of 27 pass attempts for 257 yards and two TDs, adding 44 yards rushing and another score, and no turnovers for good measure. Martinez also led a two-minute drill scoring drive after NU received a punt on their own 13-yard line with just 44 seconds left in the first half. Five plays, 87 yards, and one replay review later, and senior wideout Kanawai Noa toe-tapped in the end zone for a TD catch and extended the halftime advantage to 30-5.

“We preach a desire to excel and no fear of failure all the time,” head coach Scott Frost said after the game. “That means calling what we need to call, rolling the dice, letting them play, being aggressive. That’s the way I want them to think. If we get the ball back with 40 seconds, I want them to be thinking score.”

Not to be outdone, the run game also contributed to the win in a big way. The top two backs, junior Dedrick Mills and sophomore Maurice Washington, paced the ground game with 179 combined rushing yards, each with a 60-yard run and a score.

“I feel like we can do some amazing things in the backfield between me and Maurice,” Mills said. “We both did that today, and we will continue to do that the rest of the season.”

Leading the way defensively was senior defensive end Carlos Davis, who racked up six tackles, 1.5 sacks, and a couple tipped passes at the line of scrimmage. The Blackshirts did not allow the Huskies to reach the end zone, even when they were backed up to their own goal line in the 4th quarter.

“That drive right there, we just didn’t want to give up a score.” Davis was also proud of the consistency over all four quarters. “We were trying to put everything together, offense and defense and just have the perfect game. Last week we didn’t close it out like we were supposed to, and that was the focus coming into this week to just have a complete game.”

Northern Illinois only managed 74 rushing yards, and just 350 total yards, along with a pair of turnovers. NIU head coach Thomas Hammock expressed his disappointment. “Obviously not our best performance, like I told my team I take full responsibility. We wanted to give ourselves a chance and we didn’t do that.”

The two turnovers by Nebraska marked the third straight contest in which the Huskers took the ball away at least twice. The last time NU accomplished that feat across the first three games in a season was 2010.

The third phase of football, special teams, was indeed special. The first half alone featured junior Husky punter Matt Ference dropping the ball while attempting a punt, running short of the line to gain on a fake punt, and having a punt blocked by Nebraska redshirt freshman Isaiah Stalbird. Ference was essentially replaced on the next two punts by Ross Bowers, the Huskies’ senior quarterback, who lined up the offense on fourth down and pooch punted twice. NIU also tried an onside kick, which hopped out of bounds for a penalty.

The Huskers had their own set of issues on special teams. Senior punter Isaac Armstrong, forced into place-kicking duty with the top two kickers out with injuries, had two field goals and an extra point blocked in the first half. Though he connected on his other two point-after tries and a 36-yard FG, he was replaced by sophomore safety-turned-fourth-string-kicker Lane McCallum on the final kick of the first half and both of the second half kicks, all of which were good extra points.

Notably, Martinez led a 48-yard scoring drive in the third quarter that he capped with a 10-yard TD run. It was the ninth offensive possession of the third quarter this season, but the first such drive that produced any points. “It was great to see us come out in the second half,” Frost explained. “I love the way the guys finished. It was great to see us get in control and stay there.”

JD Spielman, the Nebraska junior, led the receiving corps with 76 yards on four catches, continuing his streak of 24 consecutive games with multiple receptions.

The Huskers were penalized only once, an unsportsmanlike conduct call on kickoff coverage. The single penalty was better than any performance in Frost’s first 14 games as head coach.

There was no update on the health status of a couple players who left the game due to injury, sophomore safety Cam Taylor-Britt and junior left tackle Brenden Jaimes. Taylor-Britt hurt his right shoulder in the first half, and Jaimes suffered an injury to his left leg.

The Huskers are back on the field next Saturday, September 21st, facing off against the Illinois Fighting Illini in Champaign, Ill. The first Big Ten conference matchup is set for a 7:00pm kick, and will be broadcast on 1400 KLIN.