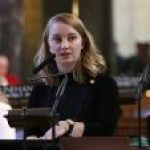 Hunt tells KLIN News that the current restrictions aren’t fair.  She points out that a volleyball player cannot even currently post a sponsored ad on Instagram or to put on a volleyball camp or serve as a coach.  Hunt says access to entrepreneurship is available to every other college student except NCAA players… and she says that is wrong.

Senator Hunt’s proposal would enable college and university athletes to profit from their name or likeness. It is similar to proposals in a number of other states following action in California over objections from the NCAA.

Hunt says that she thinks her proposal has a fair shot at passage.