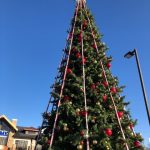 The star atop the Salvation Army’s Tree of Lights at 2nd and “O” is now shining after surpassing this year’s campaign goal.

Salvation Army Major Mark Anderson tells KLIN News that the symbolic lit star at the top serves as a beacon of hope to the city. He says that the fully lit tree and star represent “a community in its full glory of supporting with generosity those in need”.

Campaign Chair Mark Whitehead disclosed at the ceremony that they surpassed this year’s goal of $650,000 and have so far raised $690,000 with more donations coming in to assist those in need and not just at Christmas but the whole year.